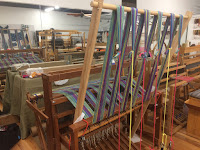 I thought the schact 8-shaft loom in our local textile center needed a workout so I scheduled some time and decided to do a doubleweave piece. I had no real use in mind but did want to take advantage of the full 45" width since my 8-shaft is only 36".  I wound my warp of 5/2 cotton alternating stripes of red/magenta with yellow.  My warping trapeze (a wonderful gift from a dear friend) made beaming alone easy and fast.

I like designs that have enough uniformity to seem planned but not so much that I had to stress about following a treadling plan. 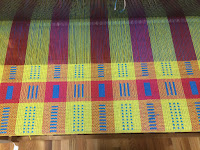 I settled on some double weave blocks that I could size on the fly using numbers from the Fibonacci series.  This allowed me to decide sizing at the loom without worry that it was going to get too chaotic. My plan was that one side of the piece would be predominately turquoise with blocks of color -- yellow, red, magenta and mixes of those colors. The reverse side would be the stripes with blocks of turquoise.

During the weaving process, since I was in the textile center, folks would come by and get drawn in by the bright colors.  The stripes were face up on the loom so it was easy to someone to see the reverse was solid blue and clearly different.  Some times I would be at a good spot to let someone stick a finger between the two layers.  Nearly everyone who stopped asked what was it I was making.  Since I had not decided that I asked each one what they thought it should be.  Most frequent answers were table square or baby blanket.  One fellow artist was emphatic that it should be hung and displayed. 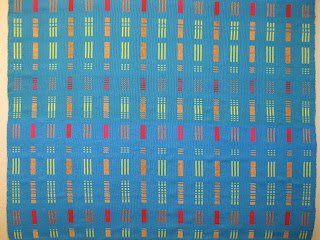 Off the loom, when I was able to get a decent look at the turquoise side, it said wall hanging to me too!
Posted by S. Lyon at 1:23 PM