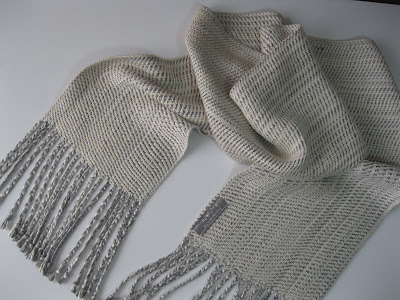 This scarf was a first for me in that it is 100% silk.  I have used silk combination fibers before but never all silk.  The warp is a rather hefty fiber labeled 'Linear Silk'.  It was provided by the recipient and looked like twisted strands of long silk fibers.  More like a twisted roving than a spun yarn.

Given it was a color gradation (named Grey Mint) I wanted to use as warp and it proved strong enough.  I used a sett of 12epi and chose a simple undulating twill structure to show off the gradation.  It was on skeins and winding the warp was a little fussy due to some thin areas in the fiber that I had to work around.  Getting it on the loom went smoothly. The weft is a standard Henry's Attic cream colored silk.  I used it doubled to match the weight of the linear silk.

The weaving was straightforward other than care to not over tension.  I was a bit worried too much tension would stress the linear silk.

I followed an article on washing silk and it turned out really lovely.  After wet finish I decided on a braided fringe because the twisted warp was not going to work with a twisted fringe.

The scarf is  heavier than one would expect for silk yet the drape is quite lovely.
Posted by S. Lyon at 2:06 PM